You'll encounter plenty of alien Starfield creatures on your voyages across the Settled Systems, so here's a rundown of every critter we've seen

Starfield creatures are non-human animals, insectoids, and everything in between that you can encounter when exploring planets. They are not always necessarily hostile – in the gameplay reveal trailer we see the player ward off a creature by pausing and aiming a pistol at it – and may even be recruitable or tameable. Previous Bethesda Game Studios games have let players recruit dogs and summon and befriend beasts, so it would seem odd to open up entire galaxies of aliens and not let us recruit a couple as followers.

So, whether you’re completing hunting missions for some of the Starfield factions, hopefully searching for new Starfield companions, or just looking to grind some XP, here are all of the creatures revealed so far and the Starfield locations you’ll find them in.

This creature is shown off in the Starfield gameplay trailer, but also appears in a Freestar Collective poster when we see the interior of The Rock. It has heavy armor, a large beak that’s great for breaking down tough, fibrous materials, and walks on four legs. 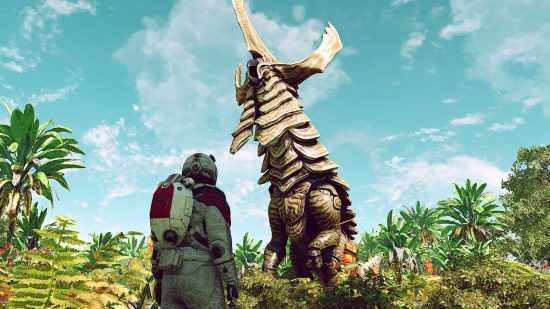 This hulking, crab-like creature is one of the first aliens you find in Starfield. It has a powerful pair of pincers and initially appears to be hostile. After a short standoff with the player it calls to its kin and they all flee the scene.

This alien is described as a cross between a wolf and a velociraptor and is the scourge of the city of Akila, the capital of the Freestar Collective faction.

This Stegosaurus-like creature can be found on the planet of Alpha Andraste II. It’s roughly the size of a rhino, has a combat level of 12, and can come with a ‘diseased’ modifier. When we see the Siren it’s in a group of 5 or 6, so we assume they roam around in packs or herds.

You can find these floating membranes on Lantana III. These behave like Bloatflys in the Fallout games, have a combat level of 15, and can also come with a ‘diseased’ modifier.

As the name suggests, this six-legged alien has a lure protruding from what we think is its head. Our guess is that this creature usually lays dormant underground until something is attracted to its lure. We see it lunging at the player and attacking with its two front legs – it has a combat level of 14 and can be found on Moloch I.

The very first creature we see in the Starfield gameplay reveal isn’t named but looks similar in size to a Radroach from the Fallout games. It’s notable that this creature doesn’t appear to be hostile at all and runs away from the player.