There will be a host of Starfield weapons to choose from when crafting your character build, from small guns all the way to energy rifles and cutters.

Forget diplomacy, Starfield weapons are what you’ll use to do most of your business across the Settled Systems and there will be plenty of guns, melee weapons, and energy-based armaments to work with.

So far we’ve only seen a fraction of the game’s arsenal. We’re not sure exactly how the weapon categories might differ from those we’ve seen in Bethesda Game Studios’ most similar game, Fallout 4, but it’s safe to assume there will be some crossover. The early look we’ve had at the list of Starfield skills suggests categories like ballistic guns, heavy weapons, snipers, and explosives. As with previous BGS games, we’re sure each of the Starfield factions will have weaponry preferences and certain Starfield NPC interaction quests will eventually reward the player with unique rewards. Below we’ve listed all the Starfield weapons spotted so far.

Here are all the Starfield weapons:

This short SMG looks like a futuristic MPX or UMP. Its magazine capacity of 40 is quite high and it looks like a jury-rigged gun compared to the weapons we’ve seen.

Crucially, the Maelstrom’s rate of fire seems to be far beyond anything else we’ve seen in Starfield so far – though that does come at the expense of ranged accuracy. If you’re getting up close and personal with your enemies, though, the Maelstrom may be one of the best Starfield guns for you. 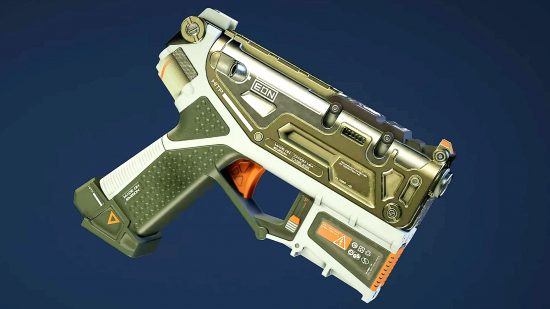 7.77x37mm bullpup SMG that looks like a cross between a P90 and AUG. Its magazine holds 50 rounds, it’s made by Combatech, and it’s described as a lightweight personal defense weapon or PDW.

The Grendel retains a high rate of fire, but it’s more capable at range than the Maelstrom, as evidenced by the scope that’ll allow you to pick off enemies from a distance.

Made by Allied Armaments, the AR-99 is a very short assault rifle but it has incredibly chunky features. It uses an 11.75x45mm ammunition, which is enormous by contemporary standards – expect it to hit like a truck.

While other armaments have it beat in terms of rate-of-fire, that raw power could make the AR-99 one of the best Starfield weapons, especially if you’re fighting at range.

Another Combatech weapon, the Equinox is used by a number of Crimson Fleet soldiers. The magazine of this energy weapon has a capacity of 20. We’re not sure what type of ammo it uses, but there’s a caution label on the side that suggests it creates dangerous amounts of UV radiation.

While it’s clear that the Equinox is capable of dealing some serious damage, it seems to require steady hands to aim accurately. In other words, this isn’t the Starfield gun for you if you tend to spray and pray your way through combat encounters.

A standard magazine for this semi-automic pistol holds 12 rounds. This gun is made by Combatech. You can add a huge amount of weapon mods to this pistol, including a big box mag, laser sight, and muzzle brake.

Expect this to be one of the most customizable Starfield weapons. And if previous Bethesda games are anything to go by, you may be able to equip Starfield skills to hone your pistol-wielding abilities.

This double-barrel shotgun fires standard shotgun shells and deals high damage close-up. The word Laredo is written across the top of the Coachman, which could be its manufacturer or an early look at a Starfield easter egg.

Either way, it should come as no surprise that Starfield’s shotgun is devastating at close range. The footage released by Bethesda makes clear that the Coachman is one of the most powerful weapons in the game in the right environments, so be sure to bring it along when you’re battling through cramped corridors or ship interiors.

A standard frag grenade. You’ll be able to use it to flush enemies from cover or to deal massive damage to larger enemies.

The presence of the Demolitions skill in the Starfield skills menu provides huge buffs for frag grenades too. At rank 3, for instance, you can expect explosives to deal 30% more damage and cover a 30% wider blast radius, making them utterly lethal in the right hands.

The second Pirate we see in the Starfield gameplay trailer can be seen dropping a knife upon dying. Right now, it’s unclear whether the knife will be a simple melee attack or whether it’s one of many Starfield melee weapons. If we had to bet on it, we’d expect the game to feature a host of razor-sharp weaponry for up-close encounters.

This laser cutter is primarily used for harvesting resources. It appears to use a fuel tank with 100 units of ammo.