A guide to every option in the Starfield character creation menu, from Biometric ID, skin tone, body shape, and walk style, to backgrounds traits

There are several key elements of the Starfield character creation screen that help you craft your Spacefarer. There are no races to choose from like in Skyrim or SPECIAL attributes as you’d expect in a Fallout game, instead your main, gameplay-facing character choices are spread across traits, backgrounds, and skills.

Of course, there are plenty of cosmetic choices in the Starfield character creation process, including Biometric ID, Personnel Record, Body Type, Walk Style, and Skin Tone, plus a heap of facial customization options, including Head Shapes, Hair, Hair Color, Eyes, and more. Skills will be your main means of finessing your character build after the initial character customization screen, but as this is a Besthesda Game Studios release we expect consumables, companion alliances, quest rewards, diseases, collectibles, and much more to factor in over the course of a playthrough.

In this guide, we’ll explain each element of the Starfield character creation screen. All of this information is from the Starfield gameplay trailer.

Biometric ID is the first major section in the Starfield character creation screen and contains one slider, which is a Personnel Record.

It’s possible that there will be a code or seed that defines each possible character permutation, as the current ‘Personnel Record’ slider looks a bit sparse. You can see a hint that there’s more to this system if you look at the note at the bottom of the screen, which reads: Biometric customizations can be changed later by visiting a genetics facility.

The Personnel Record appears to be a slider of preset characters. The build we see in the Starfield gameplay trailer has 15 presets. 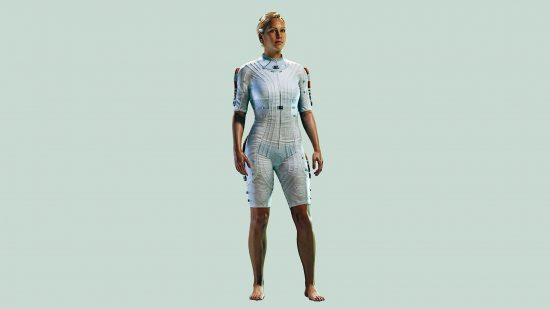 This is the second major section in the character creation screen and determines aspects like body shape and animations.

Starfield has two ways of choosing a body type. The first is a wheel with three zones for ‘Thin’, ‘Muscular’, and ‘Heavy’ and several rings that represent different degrees for each body type. It looks like this will provide plenty of nuances.

The second body type option is a slider that appears to let you switch between a male and a female body type.

We can only see two walk styles for this slider but no difference between the two.

We’ve only seen a fraction of the face customization options, and we’re sure it’ll be possible to create any face you want just like in previous Bethesda Game Studios games. Interestingly, it looks like deeper facial customization will be available by press A on a gamepad on each slider, which presumably opens up an additional set of options.

It’s not typical to have two skin tone options in a character creation menu, but we assume this will allow players to make their faces slightly different from their bodies.

This is a slider that appears to change the broader shape of your character’s head, but not necessarily the dimension of facial features. Previous BGS games have allowed players to drill a little deeper and explore features like brow size, nose, cheeks, chin, and lips.

Plenty of options here, although we can only see a fraction of them in the gameplay trailer. You can press the A button on the gamepad to customize this option further.

There are at least 15 hair color options to choose from. You can press the A button on the gamepad to customize this option further.

Plenty of presets to choose from here. You can press the A button on the gamepad to customize this option further.

Traits should be familiar with Fallout: New Vegas players. You can pick up to three traits and most of them offer a buff at the cost of a negative effect, or even align you with some of the Starfield factions. For example, the Kid Stuff trait means you have parents you can visit, but you’ll have to also send 10% of your income back to them.