There are multiple Starfield ship types in Bethesda's new space game, some you can collect and customize, and others you'll have to face in combat

There are many different Starfield ship types to choose from as you travel across the Settled Systems, and even more that you’ll have to battle against in space dogfights. Each has its own strengths and weaknesses, plus some bespoke abilities and utilities that might make it worth picking.

Different Starfield factions will have distinct ships that the spacefarer probably can’t use, but it seems that almost every other ship can be tweaked and tuned with modules and weapon systems from the dozen or so manufacturers in the game. However, it’s worth noting that you’ll need some specific Starfield skills to fit certain modules on your ship. It looks like the modules and parts you pick can significantly change how each ship type handles and performs in combat, so you shouldn’t have to constantly swap ships for different scenarios.

Here are all the known Starfield ship types:

This looks to be the default starting ship in Starfield. You can fully customize this ship type in the ship customization menu, but its stats suggest it’s an all-rounder. The Frontier has three weapon types, a good amount of cargo space, decent mobility, and a jump range of 16 lightyears. 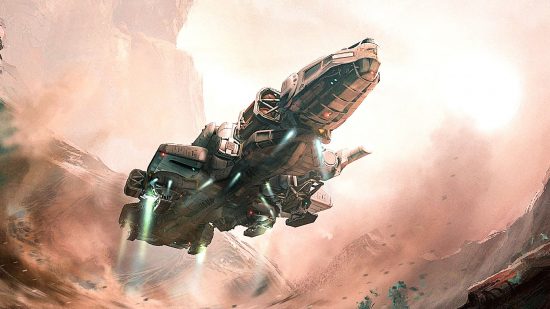 This is a slightly flatter, wider ship type with fewer weapons by default. Its lasers are powerful, but it has no ballistic threat and very weak missiles.

The Privateer is one of the largest ship types in the game. Its jump range is significantly further than the Frontier at lightyears, and it is slower during combat.

This small ship type has no weapons by default and is geared for exploration above all else with an impressive jump range of 30 lightyears. There’s not much space for the crew, but there is a modest cargo hold.

This combat-oriented vessel boasts power across all three weapon types, plus a great jump range of 25 lightyears.

This is a basic ship type for the Crimson Fleet. It looks like it can carry a handful of crew members. It’s not clear if the player can get one of these for themself.

This is only briefly glimpsed during a snippet of combat in the Starfield gameplay reveal trailer. It appears to be a medium-sized ship with lots of cargo space.